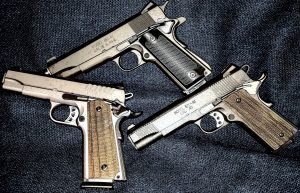 A Gunsmith’s Perspective on Maintenance and Reliability

The 1911 is one of the oldest, and most reliable pistols still available.

While the design is over 100 years old, it is still a viable defensive handgun, as attested to by it’s continued production, and it’s many variants.

For the modern 1911 user, it’s important to pay attention to the most common wear items on the gun.

Recoil springs. Very important for the reliable function of your gun.

They don’t last forever! They are cheap to replace, and easily changed as a part of normal cleaning.

If feeding issues are developing over time in your gun, look to the recoil spring first, especially

if you like shooting the hotter defensive ammo ( Cor-Bon, and such)

Full size 1911s have the longest spring life, due to having the highest slide mass, and the lowest

Shorter 1911s such as the Commander, S.A. Champion, and similar 4” or so guns have a higher

slide velocity due to their lighter weight slides and shorter slide stroke.

This is why they typically have recoil springs in the 20-22lb class.

The higher slide velocity, means the springs have to store more energy, and decelerate a faster

replacement for reliable functioning.. In the Springfield Champion and Colt Commander,

stock factory items. The EGW items are more reliable, and easier to work with than the factory pieces.

The very compact 1911’s such as the Colt Officers, the Defender and other sub-compact 1911s

are very hard on their recoil springs, and the springs have a relatively short working life.

Recoil springs tend to be specific to these guns, so keep a couple of spares on hand.

Due to the short light slides, the slide velocity is very high.

So, what’s the big deal about slide velocity?

Well, it’s tied to the feeding cycle of the gun.

The feeding cycle starts when the slide unlocks from the previous shot and the gun is in recoil.

The muzzle rises, more or less sharply, depending on the size of the gun and the velocity of the

Why do we care?

Well, as the gun is rising in recoil, the mass of the ammunition in the mag, wants to stay in the same place, due to it’s own inertia. So, relatively, the ammo in the magazine moves DOWN into

the magazine under recoil, compressing the mag spring, and moving down from the feed lips.

in it for the return trip forward, and also cocking the hammer against the hammer spring.

The action of cocking the hammer also helps decelerate the slide.

Now when the slide stops, and starts returning to battery, it has to pick up a cartridge from the

mag, on it’s way forward. The recoil spring has to store enough energy, to accelerate the slide forward, to drive a cartridge out of the magazine feed lips, up the ramp into the chamber,

and force the barrel into the locked position. Not to forget friction as well.

Lots of stuff gets done by that recoil spring!

Did I mention that 1911s are not just a bunch of parts, but are actually a collection of dynamic systems?

As the slide comes forward, the mag spring has to drive the column of cartridges upward against

the feed lips, in time for the slide to pick up a fresh cartridge and push it into the chamber.

If your mag springs are weak, or become weak, the cartridge won’t get up to the feed lips in time

to level out and be ready for pick-up.

The results of this are failures to feed, where a cartridge sticks up in the ejection port, or it just tilts and jams under the barrel hood, missing the chamber.

What has happened, is that the cartridge arrived late, and instead of the breech face catching the base of the cartridge, as it should, it catches in the extraction groove in the brass case, causing the tip-up.

Well, what’s problem? There is a very small, but finite increment of time, when the slide has gone to the rear in recoil, paused, and is returning.

During that time event, the magazine spring must overcome the downward motion of the cartridges due to recoil. Then the mag spring must drive the column of cartridges back up into the correct position against the feed lips, in time for a successful pick-up by the breechface of the slide.

Weakening mag springs are common. If feeding with a particular mag starts to develop problems, check it for obvious damage to the feed lips, or for a bad follower (especially the plastic ones).

If nothing obvious shows, it is time to replace the mag spring.

If all the mags are the same age, you should replace all the mag springs at the same time.

Just against possible failure at a bad time.

I like the mag springs made by Wolff Springs for their quality and durability.

That goes for their recoil springs as well.

If you are replacing the spring in the Wilson magazines, it is a good idea to use

the replacement plastic followers that come with the springs as well.

A chipped Wilson follower, will not lock the slide back when the mag is empty.

That reminds me. Another symptom of weak mag springs is failure to lock back on the

So, your 1911 spring condition is critical to the functioning of your gun

The spring powered plungers that hold the slide stop down, and provide a detent for the

If the safety is not positive in operation (bad news, especially in cocked-and-locked carry)

Also if the slide stop is ‘self energizing’, that is, locking back un-expectedly, change the spring.

Self-energizing is caused by the slide stop moving upward into the locked back position.

The upward motion of recoil causes the stop to rise against the bottom edge of the slide, due to it’s inertia.

When the slide stop reaches the locking notch in the slide edge, it locks back.

Extended and ‘heavy duty’ slide stops are especially bad in this regard.

Sometimes gunsmith adjustment is required to get positive operation of the slide stop,

but this is less common with todays, better parts.

The hammer spring: This spring rarely needs replacement. Some shooters will replace the stock

hammer spring with a lighter target spring intended for the Colt Gold Cup. This reduces the pressure the hammer exerts on the sear, improving the trigger pull somewhat.

Unless you are shooting light target loads all the time, stay with the stock hammer spring.

Remember, as we mentioned before, it helps decelerate the slide at the rear of its stroke.

With standard loads and the target spring, battering of frame, and the lower extension of the

slide at the front will occur, causing operational issues, and shortening the life of your nice gun.

This is especially true of aluminum framed 1911’s.

The sear spring is inside the rear of the frame, under the grip safety and mainspring housing.

This spring controls the disconnector, and the sear in your 1911.

During a trigger job, the gunsmith will adjust this flat spring for the pull weight desired, and make sure the disconnector works.

If not installed correctly, the gun won’t fire, or will fire one shot and stop, or the hammer will not

stay cocked, preventing operation. In a worst case scenario, with a complex of errors, the gun can

run away, fully automatic, out of control. Bad news for you and those around you.

A good smith performs a series of safety checks on your gun, after he works on it, to insure your

safe operation of all controls and operations. Before he returns it to you!

unless you have utter confidence in their skills, and have  seen other successful work by them.

I was nearly shot by a know-it-all auto mechanic who declared he could do a trigger job on a 1911 with just his fingers and a big file.

He smugly showed me the gun, loaded it of course, and when he

dropped the slide to demonstrate how well it fed, the hammer followed, and the gun fired.

He narrowly missed me, his younger brother, and a friend standing nearby.

Put them in when you get them.

during the feeding cycle. The cartridge head will hit the pin and not feed up into position

causing a feeding jam. Not common on the bigger 1911’s, but important on the very short guns.